Mocha vs Latte – What are the Similarities and Differences 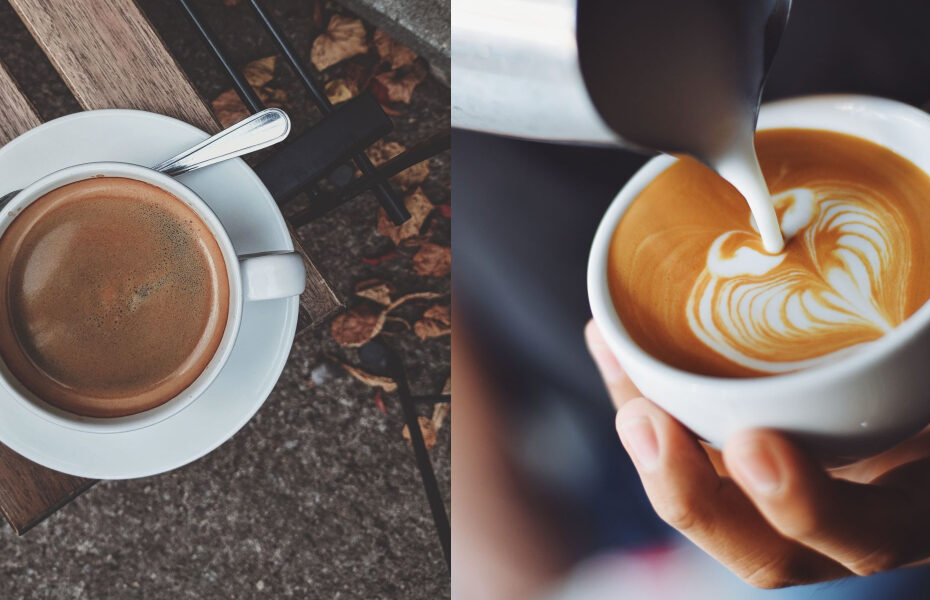 There’s comfort in food for some people. Others are comfortable with coffee. One has to snuggle around a nice, yummy cup of caffe mocha or caffe latte now and then. Although these drinks may be satisfying, the question is, what is the major difference between the two wonders of coffee? Do not fret, please; we’ve got a few helpful answers for you. You can know more about mocha vs. latte, its similarities, and differences in this article.

While many names of espresso-based drinks originate from Italian and can mean things such as double, ” the Caffe mocha refers to the Arabica coffee beans that made this drink.

The mocha takes its name from al-Makha, Yemen’s port city on the Arab peninsula, pronounced in English as Mocha. This port is central to coffee history as it’s the place where coffee was first transported from Ethiopia’s birthplace to eventually reach Middle East and Europe.

Mocha was a coffee trade hub in Yemen and what’s so unique or special about the Mocha Arabica beans in Yemen is that they have a natural chocolatey flavor.

That city has little to do with chocolate. Italians started mixing coffee and hot chocolate in Piedmont province about 200 years ago. Coffee was also called by the name of the place it came from (e.g. “java,” an island in Indonesia), so the name “mocha” probably referred to coffee rather than chocolate.

Baristas decided to attempt and boost the beans’ chocolatey flavor by adding more chocolate to the drink. But don’t think it’s just a dessert drink since it normally has two espresso shots, 2 ounces of hot chocolate, one ounce of hot milk, and a little extra foam to top it off. The Caffe Mocha is a powerful yet tasty treat, and that is for real.

How is mocha made

The mocha coffee recipe in most coffee shops typically consists of:

For a long time, adding milk to coffee has been the norm in European households. The latte caffè originated in Europe and is very popular there—especially in Italy and France, where it’s known as a lait café. In either language, the name means “milk coffee.”

From the long record of this drink beginning in the 17th century, the caffe latte, a whole carousel of different and alternative names, emerged. With some additional foam on top, the caffe latte is espresso and steamed milk. In Italian, “Caffe” means “coffee,” and “latte” means “milk.” But the drink is more than that!

It originated from cappuccino, as early as the 18th century. Milk coffee was usually served in homes rather than coffee shops, and was strictly a breakfast drink. The drink appeared in coffeehouses until the 20th century.

But at least in terms of its specific name, the caffe latte as we know it today appears to have evolved and developed over time! There is also a bit of vagueness when it comes to caffe latte in the United States. The earliest recorded proof of caffe latte in America is traced back to the 1950s, when the Caffe Mediterraneum in Berkeley, California, introduced the caffe latte to the American coffee world.

The latte became a headliner of many cafes in the 80s and 90s, particularly those in Seattle during the second coffee wave. Caffe latte is a regular feature of cafe menus today and has given itself some circles to reflect highbrow and educated culture for better or worse! However, caffe latte, to be precise, is prepared with espresso, steamed milk, and foam!

How is latte made

A latte is an espresso-based milky drink consisting of around

A regular latte in a tall, eight-ounce cup. One or two espresso shots are added to the cup, accompanied by 5-6 ounces of steamed milk. A thin layer of foamed milk overlays the brew.

Not sure if you’re a person-type mocha latte? Depends on whether you want a lighter pick-me-up or a more decadent treat. A mocha-caffè appears to be richer, while a latte-caffè tastes healthier.

The latte is perfect for those who love a cup of coffee but don’t want a full-bodied joe cup or a mocha’s sweetness.

But let’s look at it at a closer angle.

Mocha and Latte are all coffees based on espresso. They will not, in other words, be produced without an espresso shot.

Another essential ingredient for producing these two coffees is steamed milk.

The texture of milk: while all have steamed milk, the texture is distinct. The milk is silkier with far less foam for a latte, and for mocha, milk is relatively “dry” with more foam.

Garnish: a chocolate powder or chocolate syrup is normally garnished on top by the barista. It is typically served the way it is with a latte. Often, just using the milk jug, a barista with latte artistic talent can make a beautiful picture.

The awesome espresso world never fails to amaze you. Mocha vs. latte: both of these drinks are somewhat identical, but still slightly different. Note, those who wind down for the day will want to pick the quick caffe latte, while the lovers of sweet things should keep their eyes open for that chocolatey caffe mocha!